I loved the BoxeeBox, it played my movies and TV shows like a champ, found subtitles and was easy to use. The remote was awesome, it had all the buttons I really needed, entering URLs, navigating menus was easy and it look good.
Best of all it used RF instead of IR, no need for line of sight, you don't know how good that is if you haven't tried it. 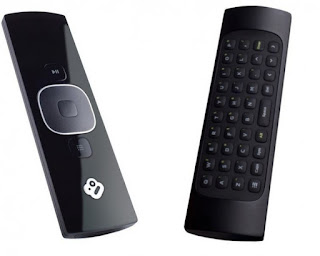 Sadly BoxeeBox lost support for SVT Play web streaming service and worst of all it couldn't steam Netflix.
So I turned to XBMC, now called Kodi.
Installed it on a old busted laptop and began the setup, that last part took almost two days. They should really add a small wizard in the installer.
There I was with a new player that delivered on all of my demands, it even does steam in-home streaming (not natively of course).
Only one small detail, no remote! sure you can use your phone to control it, but to me that's just not enough, I wanted a real remote, I wanted my old awesome BoxeeBox remote.
I googled PC remotes for almost a week, there just wasn't anything like the remote i wanted. Just look at these things!
And then i found this fuzzy picture of the BoxeeBox wifi and remote circuits : 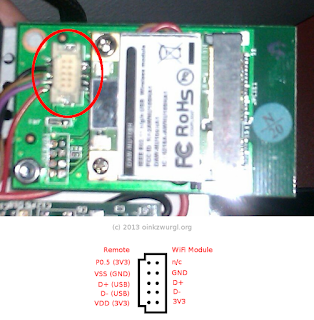 It almost looked like the control circuits in the BoxeeBox connects using standard USB, only 3.3volts instead of 5volts.

So, I whipped up a small circuit, not the prettiest, and probably overkill. Diodes could work, didn't try.

But it works! windows identifies the remote as a standard keyboard.
In a case, hidden in my TV bench. Remember, RF so no line of sight is needed.

The only thing changed was the back button, windows reads it as Escape, so I went in to the xbmc settings for keyboard, called keyboard.xml and changed Escape to do back instead of PreviousMenu.


Looking back at this now, almost two years later, I find that the XBMC/Kodi wiki reference Oinkzwurgl.org as a source for hooking up a BoxeeBox remote to xbmc, link
Hope this helped with the details as the original post isn't, to me, very clear.
Upplagd av Martin Samuelsson kl. Sunday, September 28, 2014